Torontonians come out in the thousands and from all faiths and walks of life to denounce zionist crimes in Gaza. Following Sunday's rally, they vowed to continue the struggle until the siege of Gaza is completely lifted and zionist occupation of Palestine is ended.

The streets of Toronto reverberated with chants of ‘End the Siege of Gaza’, ‘Free, Free Palestine,’ and ‘Zionism is racism, down with Zionism,’ as thousands of people marched downtown on Sunday August 10.

Organized by the Canadian Peace Alliance, the Toronto Coalition to the Stop the War and a number of faith as well as other groups including Palestine House, Al-Quds Committee, labor groups and a number of Jewish organizations, the rally attracted people from all walks of life.

Gathered opposite the Israeli consulate on Bloor Street, one of the main shopping areas, the buildings shook as people vented their anger at Zionist crimes in tiny Gaza. Repeatedly speakers denounced the Zionist regime for its crimes against the defenceless Palestinian people and the Canadian regime’s complicity in such crimes.

As happens on such occasions, a small contingent of the thuggish Jewish Defence League (JDL) group was also present in support of Zionist crimes. This rented crowd, paid for, according to informed sources from within the Jewish community, by the Israeli consulate. JDL is banned as a terrorist organization in the US but it operates freely in Canada.

While the JDL thugs claimed to stand up for Jewish rights, there were far more people of Jewish faith including several rabbis in the pro-Palestinian rally than with the JDL thugs.

Repeatedly, Jewish peace activists emphasized that they rejected Israel’s claim to speak on their behalf and repudiated JDL as a bunch of thugs that have no right to speak on behalf of the Jewish community in Canada or elsewhere.

JDL’s violent nature was exposed yet again when a bunch of hoodlums attacked two participants at Al-Quds rally on July 26. A Muslim sister and her friend that were left behind the main rally were assaulted. The police were able to identify five assailants from video footage and four have been arrested. There were also arrests of some JDL thugs in Sunday’s rally.

In an ominous development, the Zionist regime’s violent methods are being brought to Canada, as is evident from the conduct of JDL thugs. This has been demonstrated in the last four weeks when JDL thugs have indulged in violent assault on three separate occasions.

On July 7, they assaulted members of the Palestinian community when the JDL thugs went to protest outside Palestine House. Two arrests were made on that occasion but no charges were laid. Their second violent attack occurred on July 26 at the Quds rally in which arrests have been made. And yesterday was the third time that a violent JDL thug was handcuffed by the police as the pro-Gaza rally made its way through the streets of Toronto.

With thousands of people—men, women, children and the elderly—marching through Yonge Street, Toronto’s main thoroughfare, people passing in cars flashed the victory sign in support of the rally as well as those standing on the sides.

There is immense support for the suffering Palestinian people and great anger at Zionist crimes and the Harper regime’s blatant support of it. Even the other two political parties, the NDP and the Liberals, have come out in support of Zionist crimes.

The people of Canada are furious at this criminal conduct of their political leaders and clearly see that these rulers have lost the trust of the Canadian public.

There have been rallies protesting the conduct of the other two parties as well. The constituency office of Paul Dewar, the NDP foreign affairs critic, was occupied for several days in Ottawa. Today, there will be a protest rally outside a banquet hall in Mississauga where Liberal leader Justin Trudeau is attending an Eid dinner of all things!

The Gaza rally participants meanwhile vowed to continue their protests until the siege of Gaza is ended completely and Zionist forces leave all of Palestine.

There were also calls for putting Zionist rulers on trial for war crimes. The rally participants enthusiastically endorsed the call.

Torontonians come out in the thousands and from all faiths and walks of life to denounce zionist crimes in Gaza. Following Sunday's rally, t... 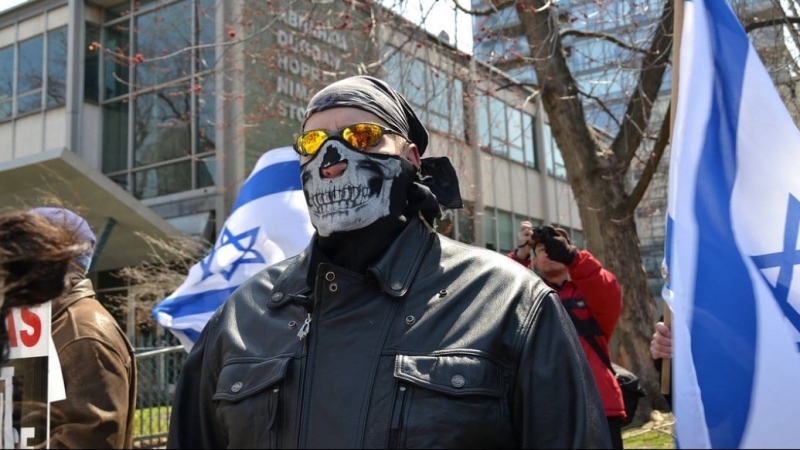 Zionist terrorism in the streets of Toronto!

Thousands rally in Toronto against Zionist barbarism in Gaza

Thousands at Toronto rally slam Israeli crimes and the Harper regime's shameless support for them. Tiny Gaza has been under attack again sin...

Reader Ahmed Mohamad Ali explains why the Zionists are getting hysterical about the success of Quds rallies in Toronto.