Home / Working toward the total transformation of the Ummah

Working toward the total transformation of the Ummah

In this column last month, I discussed the context and implications of the Ikhwan’s success in Egypt’s presidential elections in June.

A couple of points that I made raised particular comment. The first was that the establishment of Islamic government within an Islamic state is not an end in and of itself, but only a step in the process toward the real objective of the Islamic movement. The second was that this real objective is, to use a phrase coined by the late Dr. Kalim Siddiqui, the “total transformation” of Muslim societies, and that this is something that requires progress in many areas simultaneously, of which the political is only one. My object was to place the Ikhwan’s success in Egypt in some sort of perspective, in order both to recognise the scale of their achievement (not to minimise it, as some seemed to think) and to contextualise the problems they are bound to face and the criticism they are bound to receive as a result. To me and many others I have met in the movement over the last three decades, these are rudimentary points that underpin our whole understanding of the nature and work of the Islamic movement. However, it is clear that many others, including many who are fully committed to Islam and do impressive amounts of Islamic work of various kinds, still do not grasp them, usually through a lack of historical perspective and conceptual clarity. The result is seen in various ways.

the “total transformation” of Muslim societies, and that this is something that requires progress in many areas simultaneously, of which the political is only one.

One is a tendency to see the Islamic movement in purely political terms, to think and act as though the achievement of political power is the be all and end all, without being able to see around or beyond that one objective. Among such Muslims there are some who have very rigid (yet strangely simplistic) conceptions of an “Islamic state,” as though there is some magic formula that once achieved would create a perfect, utopian Islamic society in which all social and other problems would simply melt away; and others whose conception of an Islamic state or government is so fluid that they are willing to make any sort of compromise in order to come to power within the existing political systems in Muslim countries, evidently believing that all is required is for muttaqi Muslims to occupy the top positions for systems to be Islamised.

At the opposite extreme there are those who may believe in the ideal of Islamic statehood and society, but whose practical work is restricted to non-political spheres of activity, such as the purely religious (in the limited Western sense), the social, the cultural, the educational or the charitable. Often such people are put off political activism by the harsh realities of the political world or the limited perspectives and strident tones of some political Islamic activists and movements. Nonetheless, much of the work they do is invaluable to the broader struggle of the Islamic movement, even if they do not choose to see or present it in those terms. Thus the Islamic movement includes virtually all Muslims striving for the cause of Islam in their own ways, at their own levels, focussing on their own chosen priorities, at whatever level of understanding and sophistication they can achieve, provided their understanding is not so distorted that they actively disavow or oppose the political vision and objectives of the movement as a whole, as some unfortunately do.

What many Muslims fail to understand is the real extent of the impact of the constant and continuing aggressions of the West against the Muslim world over the last 200 years or so. Most Muslims understand the political consequences of colonialism and imperialism, such as the break-up of the Muslim empires and the division of the Muslim world into nation-states under aggressively secular and anti-Islamic governments of various kinds. This impact is plain to see and the replacement of these states by Islamic states an easy prescription for it. What is less easy to see, partly because it is cloaked in terms not of imperialism but of modernization, and partly because its results have penetrated deep into the very psyches and mindsets of modern Muslims, is the social and cultural impact of the destruction or subversion of Islamic institutions of state and society, and their replacement by institutions based on Western models and operating within conceptual frameworks and constraints deeply influenced by the West.

This is sometimes recognised in educational terms, as western-style schools and universities have replaced traditional Islamic madrasahs and intellectual institutions, and in political terms, where the language of democracy permeates even Islamic movement political discourse; but, in fact, it goes even deeper. The reality is that understandings of Islam itself have been distorted, in that it is now seen more in terms of personal than collective piety, and as a “religion” in the limited Western sense rather than a worldview, value system and framework of social norms underpinning and defining all aspects of social and cultural life. The result is that virtually all elements of modern Muslim societies are shaped and defined by “modern,” Western norms, and then endorsed as Islamic provided that they do not blatantly contradict or contravene Islamic teachings and values, rather than being based and defined by Islam.

This reality is an inevitable result of the impact of Western hegemony on our societies over generations. It is a process that has become deeply rooted in Muslim psyches and culture, and cannot easily be reversed. It is inevitable that many Muslims whose commitment and sincerity is beyond doubt are bound to think and operate within such westernised frameworks. It is hardly surprising that many Islamic movements that are wholly committed to resisting Western hegemony and the westernization of Muslim societies themselves suffer from this problem. And many of them, despite these problems, are doing invaluable and essential work of different kinds even on the basis of limited and partial understandings of the historical situation and challenges we face.

The problem is that too many Muslims, even historically and politically conscious ones, are unaware of the issue. Too many are happy to move forward from where we are today without understanding the damage that has already been done to Muslim societies and must be undone as far as possible. They are committed to the transformation of Muslim societies but do not grasp the depth and the totality of transformation that is required.

Of course, we cannot and must not go back to where we were before the impact of Western colonization. On the one hand, the Muslim world had already drifted far from Islamic ideals long before the West took advantage of our resultant weakness; on the other, there have been numerous technical and social developments the results of which we must accept and learn to live with. What is required is that we imagine what Islamic institutions and society might look like in the modern world had earlier generations not drifted, and how we might have responded to the challenges and advances of modernity had they not been accompanied by aggressive and destructive Western hegemony.

Another way of looking at this is to consider how Muslims might have responded to the problems faced by Muslim societies on the basis of their Islamic values had the natural evolution of those societies not been interrupted and distorted by the invasion of the West.

The total transformation of Muslim societies requires that we confront three concurrent processes stemming from Western hegemony: continuing external imperialism, the authoritarianism of anti-Islamic states in Muslim countries, and the disintegration of Islamic norms and values in Muslim psyches and societies, a process often associated with cultural hegemony. All three are widely recognised in different forms but they are often not associated with one another. But in fact, all are inseparable, and any effort against one must involve challenging the others as well.

Addressing all these issues simultaneously and concurrently is essential for the success of the movement, although the immediacy of the challenges they pose and the timescales on which success may be seen and measured are naturally quite different. And it is the combined results of these processes which will be recognised in future as a total transformation of the Muslim world from the low point represented by the near-triumph of Western imperialism. This is the broader process toward the “total transformation” of the Muslim world within which the work of movements such as the Ikhwan must be located. What is essential is that Muslims working in any or all of these many areas recognise the wider historical scope and context of their struggles, for it will only be then that their contributions can come together to make the best possible progress toward our common goal, insha’allah.

Egypt may yet take its rightful place in the Muslim world after the election of Mohamed Mursi as president.

In a crowded field of 13 candidates, Dr. Muhammad al-Mursi of the Ikhwan-backed Hizb al-Hurriyah wa-al-‘Adalah (the Freedom and Justice Pa...

Failure of the Ikhwan in Egypt 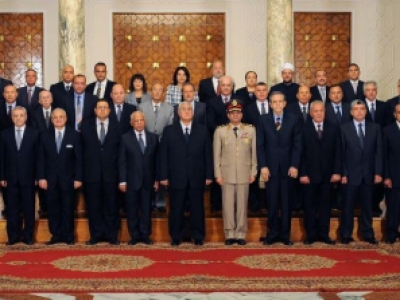 What went wrong in Egypt?

The July 3 coup in Egypt has set the people of Egypt back by many decades. The brutal crackdown on supporters of the Muslim Brotherhood and ...