What specific characteristics do the despotic regimes in the UAE, Egypt, Azerbaijan and Tajikistan have in common?

If corruption and torture immediately spring to mind, those are not what we are hinting at.

These regimes utilize the services of Interpol to target political opponents abroad.

These and other autocratic regimes provide Interpol with “proper” paperwork that consists of rulings by their kangaroo courts, often accompanied by confessions or witness statements against political dissidents extracted through torture or other coercive means.

Once the paperwork is filed, Interpol then has “legitimate” legal cover to execute the wishes of the brutal regimes. It issues international arrest requests, known in Interpol legal jargon as “red notice”.

The autocratic regimes’ submission of “proper” paperwork to Interpol provides the latter with plausible deniability.

In many instances these red notices are not taken to conclusion, that is, the dissidents are not extradited to the countries hunting for them.

Political dissidents are detained at their port of arrival or exit in whatever country, for months and often years.

This also depends on how close the political alliance is between the state requesting detention and the one carrying it out.

The degree of corruption of the detaining state also plays a major role in whether autocratic regimes can buy extradition of the dissident they are hunting for.

Among the listed countries, the UAE stands out as the most aggressive user of Interpol’s mechanisms. It uses the agency to hunt for those who have defaulted on bank loans in the tiny shaykhdom.

The abuse of Interpol’s red notice system is not a new phenomenon.

Thus, the agency cannot claim ignorance or that it is working to fix it.

A quick Internet search reveals cases where Interpol has been malfunctioning for decades.

And the organization is fully aware of these problems.

Dolkun Isa, a well-known activist and member of the World Uyghur Congress, has been the victim of Chinese red notice abuse since 2003.

What exposes Interpol’s vile conduct is also the fact that states not in NATO’s good books get much greater exposure in the corporate media and Interpol has no issues in cooperating with highlighting these abuses.

Western backed regimes like the UAE, Azerbaijan, Tajikistan and Egypt on the other hand merely get a slap on the wrist.

The level of suffering inflicted on victims of Interpol’s mischievous system also depends on whether they hold a Western passport.

A political dissident with a Western passport is more likely to receive media attention than those without.

Currently there are many organizations and media outlets that are working on helping the victims of Interpol’s red notice abuses.

This approach, however, deals with symptoms, not the causes.

Prior to publishing this story, Crescent International contacted Interpol’s media office to respond to the years of malfunction of their system.

Here is part of the generic statement that was emailed to us.

“The INTERPOL General Secretariat headquarters. In November 2016 the General Secretariat established a dedicated task force comprising a multi-disciplinary unit including lawyers, police officers, analysts and operational specialists which reviews every Red Notice request. All requests are examined carefully by the task force to ensure that they comply with INTERPOL’s Constitution and rules. As part of the review by the task force, additional information from all relevant sources may be requested in order for a decision to made whether a Notice is issued or not.”

The system that Interpol put in place is clearly inadequate as Mirzorakhim Kuzov, a senior leader of the Islamic Renaissance Party of Tajikistan (IRPT), was detained on October 9, 2017 in Greece due to Interpol’s red notice request.

There are numerous other cases which show that the system Interpol put in place in 2016 is not working.

People detained under red notices often lose a great deal of time, money and become unemployment fighting the unjust warrants while being locked up in the country of arrest.

What is needed is a multi-billion dollar mass class-action lawsuit against Interpol and sustained public pressure to disqualify abuser states from using the red notice system.

Until this takes place, no human rights activist, journalist or academic can truly feel safe when traveling.

Recept Tayip Erdogan is no democrat; he is a dictator. That is the only way to describe him.

Recep Tayip Erdogan is a ruthless politician. He acts like a street thug insisting on having his way. This is what has just transpired in fo...

Elections have become the latest fad around the world. It seems everyone has discovered that elections can be a useful tool to fool almost a... 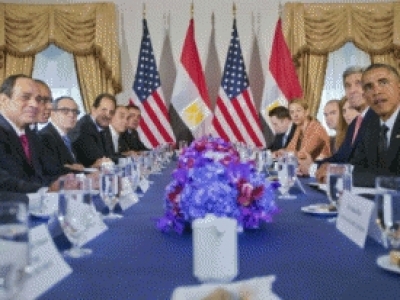 Fear turns every Egyptian into an informant

The military regime in Egypt has instilled such fear in people that they have all become informants for the government.