War on Gaza: winners and losers

Zionist Israel may have killed thousands of civilians in Gaza but it has failed to achieve any of its military objectives.

Wars are waged to achieve specific political objectives. Aggressors seldom spell these out and try to hide behind high sounding rhetoric of “self-defence” or warding off aggression. It is also said that war is diplomacy by other means. The Zionists have turned war into an instrument of their never-ending expansionist policy in Occupied Palestine. They are intoxicated by US-supplied hi-tech weapons that they believe would enable them to realize their megalomaniacal ambitions. If purely material considerations were the criteria, they would be right but when people are imbued with a higher spirit embedded in justice and refuse to surrender, they can turn insurmountable odds in their favour.

This is what Hamas and Islamic Jihad have done in tiny Gaza that has been subjected to relentless bombardment by the Zionists since July 1 (the war officially started on July 8 but Zionist missiles had started to rain down on Gaza a week earlier). The alien invaders of Palestine thought there would be a cease-fire in a week to 10 days’ time after they have slaughtered enough Palestinians — several hundred or even several thousand. They have murdered thousands of Palestinians — 2,200 to be precise by August 26, the overwhelming majority of them civilians (80% according to UNICEF figures). Nearly 570 children have also been murdered during the six-week period. Even children playing on the beach have not been spared, their tiny bodies blown to pieces by Israel’s “precision” guided US-supplied weapons! If killing large numbers of civilians were a sign of success or civilization, Zionist Israel would be the most successful entity in the world. Instead, it has incurred global revulsion even if Western regimes and indeed regimes in the Arabian world have sided with it.

Thousands of Palestinian homes including apartment buildings have been bombed and destroyed in the most barbaric manner. Schools, masjids and hospitals have similarly been targeted and destroyed. Gaza’s sole power plant has also been destroyed plunging the tiny enclave into darkness. Without power, hospitals, already desperately short of medicines, have found it extremely difficult to cope with the thousands of casualties. Generators installed to provide back-up power cannot function because of lack of fuel.

Under ordinary circumstances, this would have forced the victims to surrender. Not the people of Gaza; they are completely fed up with living in a huge prison that has been under siege since 2007. They have been put on “starvation diet,” as one Israeli arrogantly admitted. The people of Gaza have made it clear to the leaders of Hamas and Islamic Jihad that if they have to die, they would prefer a dignified death to the slow strangulation by the Zionists. Thus despite suffering massive casualties, the people of Gaza, far from turning against their leaders, have in fact become more determined to continue the struggle. This is a great source of strength for the resistance fighters.

The Zionist objective all along has been to make life so difficult for the people that they will turn against Hamas. This has not happened. Instead, the people’s resolve to stand up for their rights has been strengthened. This is a situation the Zionists cannot fathom. Further, the longer the war went on, the more it cost them. True, it also cost the Palestinians but they are living pretty close to the ground anyway; they can take a lot more losses than the Zionists who thrive as parasites on the American body.

Let us compare some figures. While the Palestinians have suffered 2,120 or more deaths, 80% of them civilians, the comparable Zionist figures (as admitted by the zionist regime) are 71, all but four of them soldiers. Hamas claims to have killed more than 150 Israeli soldiers and given the fact that its statements throughout the zionist onslaught have proved right, this figure must also be correct. Even the four Israeli civilian deaths include one foreign worker (from Thailand). Thus, the overwhelming Israeli deaths are those of soldiers. This has been a rude shock for the Zionists. In Israel’s three previous wars — against Hizbullah in July–August 2006, Gaza in December 2008–January 2009 and again in Gaza in November 2012 — the combined Israeli losses were 137. The highest of these losses were suffered against Hizbullah in Lebanon when 121 Israeli soldiers were killed. The Zionists do mind dying!

So how did Hamas and Islamic Jihad achieve this remarkable feat when they only possess small arms and some crude homemade missiles? They have learned to improvise. Unable to match the Zionists’ firepower, the Palestinians resorted to underground warfare, literally. They have dug hundreds of tunnels under Gaza in order to protect their military assets as well as confront Zionist troops in direct combat. When they are in close proximity, the Palestinians neutralize the Zionists’ superiority in weapons. Israeli planes, missiles and other heavy weapons are of little use. It is at this level that the Palestinians have been able to inflict massive damage on the Zionists. This also explains why the Israelis are so scared of invading Gaza again or staying in the tiny enclave for too long. They prefer to use their long-range artillery, missiles, Apache helicopters and F-16 planes to blow up apartment buildings and indeed entire neighbourhoods. This is hardly a sign of bravery.

Hamas and Islamic Jihad have also forced Israel to negotiate with them, albeit indirectly and as part of a larger Palestinian delegation in Cairo. Israel’s claims to the contrary notwithstanding, it is forced to negotiate with Hamas and Islamic Jihad. If it had won or was winning the war, would Israel be willing to negotiate? True, the Zionists indulge in their favourite tactic of stalling and procrastinating, but Hamas has made it clear that they would accept nothing short of the complete lifting of the siege of Gaza as well as extension of the fishing limit to 12 nautical miles that is Gaza’s right. The Zionists have been forced to concede some of these points already. Even US President Barack Obama and UN Secretary General Ban Ki moon have said that the siege cannot last indefinitely and must be lifted. This is a slap in the face of Israel.

The Palestinians have won a clear victory not because of superior weapons but because truth is on their side and their leaders have shown steely determination. This has important lessons for Islamic movements everywhere. Gaza’s resistance also exposes the cowardly Arabian rulers with their hundreds of planes, thousands of tanks and artillery pieces yet all rushing to surrender to the Zionist entity. 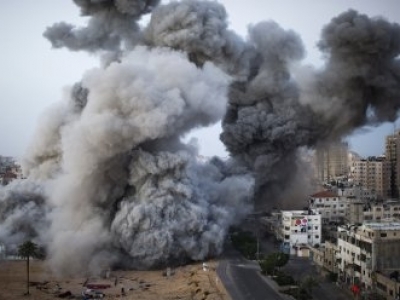 The Zionist regime would not be able to carry out its crimes against the hapless people of Gaza with such impunity were it not for direct su...

Resistance forced Israel to accept truce on its terms

Hamas and Islamic Jihad, showing resilience and determination, have forced the zionists to accept their terms for a truce. Israel failed to ...

Killing unarmed Palestinians is routine for the Zionists, as is the unqualified support of Western regimes for such war crimes.

Truth about Israel’s latest war on Gaza: the energy rush

Israel's war on Gaza has little to do with missiles or rockets fired by Hamas; the fact is Israel is after the vast natural gas reserves in ...