Witnessed ‘Days of Allah’ since assassination of General Soleimani – Rahbar

By assassinating General Qassem Soleimani, far from being an achievement for the US, brought disgrace for its “terrorist” act.

The Rahbar, Imam Seyyed Ali Khamenei, leader of the Islamic Revolution said this in his Friday khutbah today (January 17).

This was the first time in eight years that the Rahbar personally led the Friday prayer and delivered the khutbah.

It reflected significance of the occasion coming soon after the massive crowds that attended General Soleimani’s funeral prayers and the blows Iran’s Revolutionary Guards Corps (IRGC) delivered to the US in response.

The Rahbar called Iran’s retaliation a big blow to the US and described it as ‘Ayyam Allah’ (the days of Allah).

“The day the missiles of the Islamic Revolution Guards Corps crushed the US base is one of the days of Allah. The Guards’ response was a major blow to America's fearsome superpower image,” the Rahbar told a massive crowd in Tehran gathered for Friday prayers.

Soon after the Iranian missile strikes at Ain al Asad and Erbil military bases in Iraq that are used by US forces, the Americans denied there were any casualties. Today (January 17), however, most media outlets reported that there were at least 11 US troops that had suffered injuries.

Reflecting on the events of the past two weeks, the Rahbar described them as “extraordinary” that were marked by both bitter and sweet developments containing lessons for the Iranian people.

“The day of God means seeing the hand of Allah in these events - the day when tens of millions in Iran and hundreds of thousands in Iraq and some other countries came out in the streets to honor the blood of the commander of the Quds Force,” the Rahbar said.

“The day the Guards’ missiles pounded the American base is another day of God. We saw these two days of God before our eyes. The days are a turning point which make history. They are not ordinary days,” he said.

“When the people summon so much power and mental courage to slap an arrogant and bullying force of the world in such a fashion, it is a sign that the hand of the divine power” is involved, the Rahbar said.

The Leader described the Iranian people as “patient, resistant and very grateful [to Allah]”.

While Zionist media outlets and officials of the US regime tried to accuse the great revolutionary commander of terrorism, “Allah Almighty changed the scene so that not only in Iran but also in various countries, people prayed for his soul and burned American and Zionist flags.”

By assassinating General Soleimani, the most prominent and powerful commander in the fight against terrorism in the entire region, the US had disgraced and dishonored itself, the Rahbar said.

“The Americans did not face him on the battlefield but committed their crime stealthily and cowardly, bringing about more disgrace to themselves,” the Leader added.

The Rahbar also ridiculed the “American clowns who claim” with utter insincerity to be standing with the Iranian people. This was a reference to the series of tweets by US President Donald Trump and his Secretary of State Mike Pompeo.

Referring to the few hundred protesters who tore the poster of General Soleimani during protests over the downed Ukrainian airliner, the Rahbar said, “Does a group of a few hundred who insulted the image of the nation’s compassionate and celebrated commander represent the Iranian people, but not the massive crowds running into millions who honored Haj Qassem in the streets?”

He reminded the massive crowds that “the Americans have never been with the Iranian people and they are blatantly lying. If they are, it is meant at driving a poisonous dagger in the heart of this nation. Of course, they have failed so far and will be unable to do a damn thing from now on either,” he added.

“The blood of the Iranians and Iraqis had been mixed in the soil of Iraq and this had brought them closer to each other,” said the Rahbar. 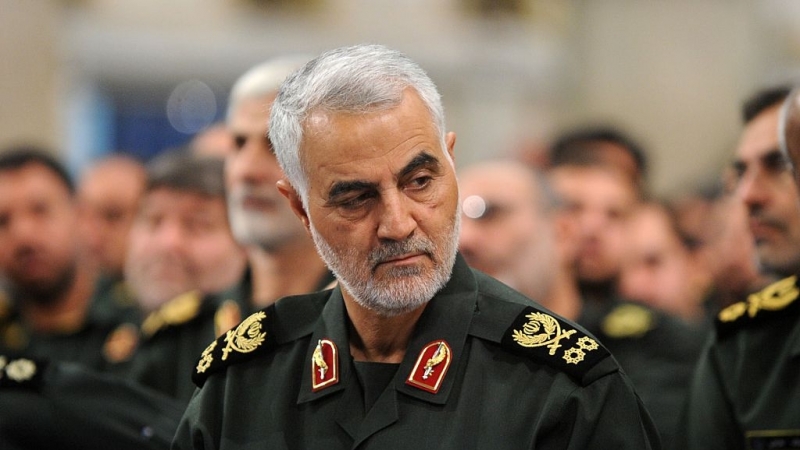 Assassination of General Soleimani: Beginning of the end of US presence in the region

Informational War post-Iran Strikes on US Bases in Iraq