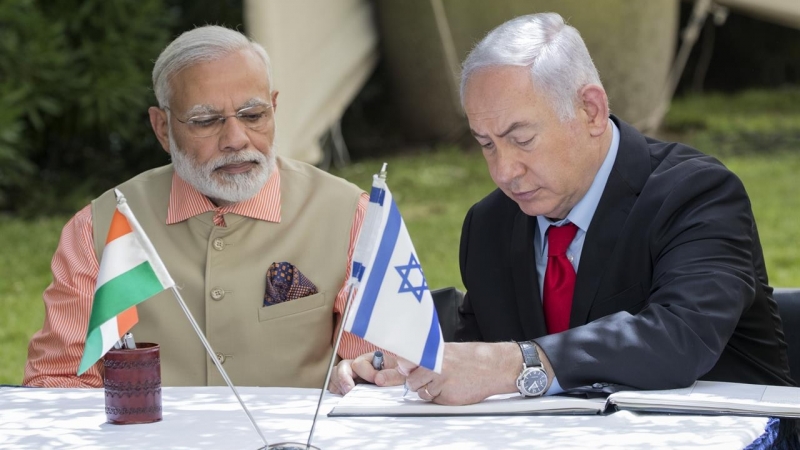 The world is full of obnoxious creatures wedded to nasty ideologies. Nothing, however, comes close to Hindu India and Zionist Israel. Alliance between the two pariah regimes has deepened to the point where it poses a serious threat not only to the region but also to the entire world.

Last month, Indian Prime Minister Narendra Modi, a certified mass murderer, visited his equally bloodthirsty counterpart in Israel, Benjamin Netanyahu. Not surprisingly, the two got along fabulously well. Accompanied by his entire cabinet, Netanyahu received Modi at the tarmac at Ben Gurion airport. Such lavish treatment has previously been afforded to US President Donald Trump and the pope. So what is so special about Modi?

True, he is the first Indian prime minister to set foot in Israel but that alone does not explain the lavish reception — especially for a lower caste Hindu who is known for his anti-social behavior (Modi consumes his meals alone!) — given to him. He also has a habit of bear-hugging rulers that he wants to curry favor with (sorry for the pun). Trump appeared distinctly uncomfortable when Modi hugged him in Washington. It could not be attributed entirely to the smell of onions and garlic.

Like in Washington, so in Tel Aviv: Modi went for the bear hug and the racist Netanyahu accepted it because he is anxious to sell a lot of goods to Hindu India. In April, Israel’s Aerospace Industries signed a deal to supply $2.1 billion worth of missiles and air defence systems to the Indian army. This is the largest defence contract in Israel’s history.

With 40% of Israel’s defence exports going to India makes Tel Aviv its third-largest supplier of military hardware. And that says a lot given that the biggest merchants of death — the US, UK, France, etc. — are always eager to sell their murderous wares to anyone willing to pay for them regardless of how oppressive the regime is. The two pariah regimes also signed contracts for cooperation in agriculture, hi-tech, and aerospace industries.

In the past, Indian rulers were a little more circumspect, even if hypocritically, in maintaining some semblance of balance, especially espousing support for the Palestinians. This has now been abandoned as was evident from the fact that Modi did not bother to meet even the Zionist puppet Mahmoud Abbas during his three-day visit. Instead, leaders of the Qadianis and Bahais were at the airport to welcome him. While the Bahais maintain their headquarters in Israel, the Qadiani’s presence raises serious questions and exposes their links with the sworn enemies of Muslims.

Modi’s Israel visit signals a realignment of forces in the world. A number of oppressive regimes are now working closely with each other to undermine the aspirations of the people. The new axis of evil comprises the US, Israel, India, and Saudi Arabia. Committed Muslims and people everywhere struggling for justice should take note of this new alliance of tyrants and oppressors.

How nasty is Narendra Modi? Even Indians admit he is a disgrace and has the blood of innocent people on his hands.

Hindu fascism led by the ‘Cow vigilantes’, is a growing threat to religious minorities, especially Muslims in India.

Narendra Modi, Amit Shah, and their ilk are the most visible faces of fascism in India today but its roots go deep into Hinduism.