Home / The greater struggle between imperialism and Islamic self-determination

The greater struggle between imperialism and Islamic self-determination

Five years and still sinking. That is what may well best describe the overall status in the world of its “sole superpower” as it careens from one war-euphemism to another. The United States of America, the inheritor of twentieth-century superpower rivalry, has been scrambling propaganda flares to distract attention from its downward movement ever since it invaded Iraq. From Rumsfeld’s initial Hollywood “shock and awe” to Bush’s “mission accomplished” all the way to “the surge”, the USgovernment has been seeing stars over Iraq and grovelling in mud. The US is now in round six (each round lasting about a year) and the signs of an impending knock-out punch are now showing. Iraq has become to the US what Afghanistan was to the Soviet Union, or, to put it another way, Iraq is America’s second Viet Nam. The US’s imperialist foreign policy could not win over the people of Viet Nam, so the US was destined to a rout and a defeat in that part of the world.

The lesson of Viet Nam is excruciatingly slow to penetrate the brains of the imperialist thinktanks and policy-makers who comprise the command and control hierarchy in Washington DC. Anyone listening to the current debates among the presidential candidates cannot mistake the demoralization and disorientation that have seized both Republicans and Democrats. The main difference between them is that the former speak in terms of a willingness to stay in Iraq for another one hundred years, and the latter speak in terms of a willingness to withdraw from Iraq post haste.

We Muslims may thank Allah (swt) that there is no longer any significant sense of political purpose in either the Democratic or Republican party in the nation’s capital. If there had been, they would now be telling their people and the rest of the world that the war on Iraq was never really meant to bring democracy to that part of the world. There have always been two main considerations in American foreign policy: oil and Israel. These are the reasons why the US went into Iraq, and also the reason why the US cannot leave Iraq. The American military-industrial-banking complex needs the oil-wells to keep the capitalist economy afloat. Other economies are threatening to overtake the US’s: China and India, followed by Russia and Japan; and they all need oil. So if the US cannot compete in the usual way in an open market and international business relationships, then the cowboy way to go about it is to occupy the oil-fields that belong to those “Airaabs” and “Irainiyens”! Anyone who has passed American History 101 knows that the legacy of “Dodge City”, the “Wild West” and killing those “Indjuns” is as American as apple pie. What no one writes in history books or in current commentaries is that the native Americans, the Japanese, the Vietnamese and others were “warm-up sessions” for the existing strategy of embarking on a century-long war to “nip Islamic self-determination in the bud.”

Listen to Henry Kissinger, for instance. After three decades of anti-Islamic combat, the wizard of “Middle East shuttle diplomacy” has at long last woken up. “Today it is radical Islam that threatens the already brittle state structure via a fundamentalist interpretation of the Koran [sic.] as the basis of a universal political organization. Jihadist Islam rejects national sovereignty based on secular state models; it seeks to extend its reach to wherever significant populations profess the Muslim faith. Since neither the international system nor the internal structure of existing states has legitimacy in Islamist eyes, its ideology leaves little room for Western notions of negotiation or equilibrium in a region of vital interest to the security and well-being of the industrial state. That struggle is endemic; we do not have the option of withdrawal. We can retreat from any one place, such as Iraq, but only to be obliged to resist from new position, probably more disadvantageously. Even advocates of unilateral withdrawal from Iraq speak of retaining residual forces to prevent a resurgence of al-Qaeda or radicalism.” Thus speaks Kissinger, mouthpiece of US foreign policy in general, and of the US’s right to continued world-domination in particular.

We can overlook Kissinger’s inability to spell the word “Qur’an” correctly; he is definitely too old to be taking spelling lessons. But what we cannot ignore is his hostile disposition towards Islam. “The struggle is endemic”: he speaks as though the natural resources in Muslim lands belong to him and his kind. He implies that a victory of self-determined Muslims is going to wreck Western civilization. The problem is that this Kissingerian point of view is not the internal thoughts of a retired diplomat or politician; this is the mentality that shapes the policies of most Republicans and Conservatives, who have given us and the rest of the world almost eight years of war, to be followed, as they themselves admit, by a century of war. This “kill them” instinct on the American right cannot even tolerate the diplomatic hypocrisy of the American left. Former president Jimmy Carter is scheduled to meet with Khalid Mesh’al of Hamas, and all the right-wing figures in Washington and Tel Aviv are having fits of anger about it, despite the fact that in his encounter with Hamas Carter was be accompanied by Stephen Solarz, a Jewish ex-Congressman from New York state.

This all brings us to the crux of the matter. That is that the war, which is costing ordinary Americans one thousand military and civilian lives a year or more, is just one battle in a larger theater of imperialist and zionist wars against Islam. The Israeli Dracula cannot quench its thirst for Palestinian and Arab blood. It has been, since its inception, shedding Muslim and Christian blood in one war after another. The long arm of American foreign intrigue has had disturbing effects inside Lebanon against Hizbullah in the course of the past couple of years in particular. Even within the Palestinian occupied territories and also within the Palestinian diaspora, zionist-inspired American foreign policy has gambled heedlessly on one of Arafat’s flunkies; i.e., Mahmud Abbas. And still the American-Israeli agenda has been forestalled. Even the joint diplomatic effort of the US and Israel to throw into the Lebanese domestic situation a UN force has virtually collapsed. Hizbullah now has been reconstituted to withstand an Israeli military assault and to rain destruction upon virtually any legitimate target within occupied Palestine.

It becomes clearer than ever that the zionist proxies in Washington, Riyadh, Beirut and Baghdad will have to be opposed, in part by force. It is going to take a major sustained effort to bring down the tyrants and their tyranny, or at least contain them in their own homelands.

“And on that day the committed Muslims will rejoice with Allah’s victory...” 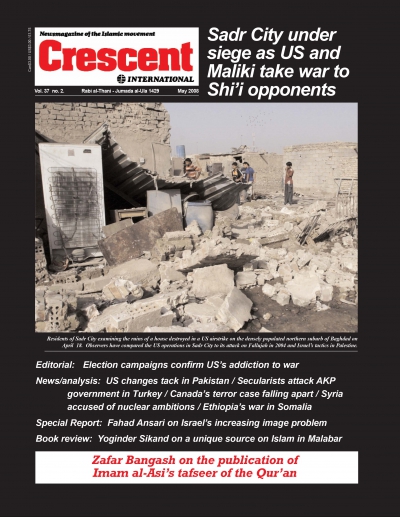 The Israeli Amalek just do not get it. Their military failure in the summer of 2006 against Hizbullah in Lebanon did not register. Their Ame...

Anguished Cries of the Kashmiris

For 70 years, the people of Kashmir have suffered a brutal Indian military occupation. However, tey have not been cowed. Their determination...

Revealing the fictions of American supremacy

The Rahbar’s analysis of the Iraq war: "The emerging Hitlerism of America"

​Speaking in Mashhad on March 23, the Rahbar of Islamic Iran, IMAM SAYYID ALI KHAMENEI, gave a detailed analysis of the reasons for Americ...