Home / Anguished Cries of the Kashmiris

Anguished Cries of the Kashmiris 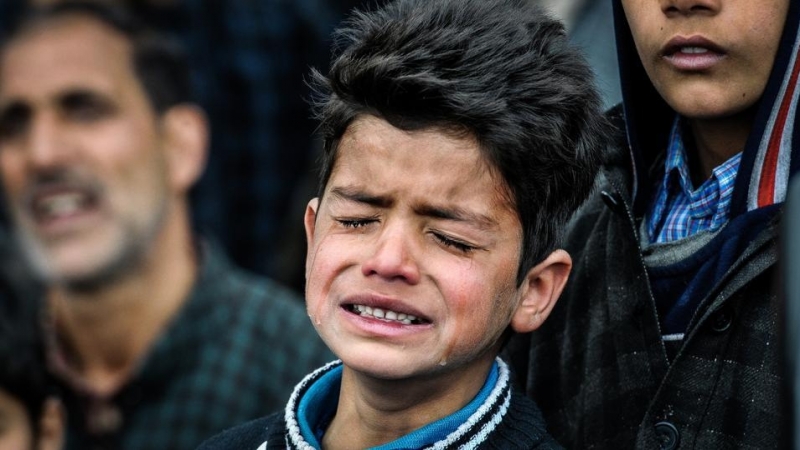 Like the Palestinians under Zionist occupation, the Kashmiris too suffer under the boot of the brutal Indian army of occupation. Both occupations date back to 1947 with scores of United Nations Security Council resolutions affirming the indigenous peoples’ rights to be respected. In Palestine, alien Zionist invaders from Europe, Russia, and North America took over the Palestinians land, killing tens of thousands of them in the process. In Kashmir, Hindu invaders murdered more than 300,000 Kashmiris, forcing others to flee for their lives.

The people of Kashmir have struggled for 70 years seeking the right to self-determination as enshrined in 18 Security Council resolutions. The entire world recognizes their right but few countries are willing to help the Kashmiris achieve it. Pakistan stands virtually alone in support of the Kashmiris’ right to a referendum to determine their future.

True, Pakistan has a vested interest in the matter but it is not merely that; there is a principle involved. Article 1:1 of the International Covenant on Civil and Political Rights states, inter alia, “All peoples have the right of self-determination. By virtue of that right they freely determine their political status and freely pursue their economic, social, and cultural development.”

The people of Kashmir have paid a heavy price in life, blood and honor in their struggle to secure this right. Since early-1989, the one-million-strong Indian army of occupation has murdered more than 94,000 Kashmiris. Thousands of people have simply disappeared and to India’s eternal shame, its troops have raped more than 11,000 Kashmiri women. India uses rape as an instrument of war. And not one soldier has been charged or prosecuted for such heinous crimes.

Despite such well-documented Indian crimes — from Amnesty International, Human Rights Watch, and numerous Indian human rights organizations — there is scant attention paid to these in the Western media. Similarly, Western governments, more interested in red-carpeting arms deals while lip servicing principle, have turned a blind eye to Indian crimes against innocent people despite recognizing Kashmir’s disputed status whose future must be determined according to the wishes of the people through a UN-supervised referendum.

To their credit, the people of Kashmir have not become dejected despite these setbacks. They have continued to struggle for the right to determine their own future. India’s unrelenting brutality has only strengthened their resolve and determination. Despite a massive Indian military presence, the Kashmiris in towns big and small and in villages and cities, hold daily protests facing the heavily armed Indian colonization troops with their bare hands. The struggle for freedom reverberates from every street corner and from every rooftop. Young and old, men and women have now joined the freedom struggle.

It is common sight to see children and women hurling stones at Indian armored personnel carriers. While stones are no match for Indian military vehicles, the Kashmiris’ actions reflect their hatred of the occupiers. A common graffiti seen on walls reflects the Kashmiris’ hatred of the occupiers: “Indian Dogs, Go Home.” To call someone a dog is the ultimate insult in that part of the world.

Brutalized by the Indian army and largely ignored by the world including many Muslim countries, what choices do the people of Kashmir have? The first point to bear in mind is that they must not lose hope. So far, their determination has been exemplary. Second, if the Western media or governments have ignored their suffering, there are alternatives to get their message across. One is social media. The other important platform is that of organizations struggling for social and political justice in all parts of the world. These organizations must be approached, informed of the Kashmiris’ suffering, and mobilized in their support. Since many of these organizations’ members are from the labor or trade union movements, they can be effective in boycotting Indian goods to send a message that their brutal conduct will not go unchallenged.

Given a large number of Muslims now residing in Europe and North America, channels of communications must be opened with these organizations for help. The Palestinians’ cause has been adopted by many organizations in the West. Why can’t the Kashmiris’ cause garner similar support?

It is time to think outside the box and reach out to people dedicated to social and political justice issues.

Zafar Bangash is Director of the Institute of Contemporary Islamic Thought (ICIT).

The Hindu occupation army has escalated its brutal crackdown on the people of Kashmir that have been struggling for their fundamental right ...

The desire for freedom that glows in people’s hearts cannot be put out, though it occasionally flickers low. It is sustained by the justi...

By sustaining their campaign against a 700,000-strong army of occupation, the Kashmiris have shown they are not cowed down by oppression and...

Why the almost universal silence over India's horrific crimes against the Kashmiris?

Between July 9 and 31, the Indian occupation troops shot and killed 74 Kashmiris, most of them young men but also some children. In a new ta...