Like children fighting over toys, Saudi and Qatari rulers are involved in infantile squabbles much to the annoyance of their US-Nato masters.

As Syria continues to burn in its ghastly conflagration, emptying a country of half its population, the parlor spats of the Persian Gulf monarchies illustrate the tenuous nature of the confederates of civil war and destabilization in the Arab world. Old rivals Qatar and Saudi Arabia are once again butting heads, jeopardizing the US-Israeli project of fanning the black flames of war in Syria.

This quarrel is hardly new. Back in January, the quarrel between Saudi Arabia and Qatar strained the rebel confederacy of the Geneva 2 conference convened on January 22, a forum sponsored by NATO warlords as both psychological warfare and a time-gaining ploy. The breakdown of the takfiri rebel confederacy in the weeks leading up to Geneva 2 was a critical factor in the victory of the Syrian Army supported by Hizbullah fighters and Iranian political and diplomatic backing. Both Saudi Arabia and Qatar have been arming rebel factions with high-tech weaponry, aiding the savage bloodletting on the ground. And now that the US is pushing for the reconsolidation of the Syrian rebel alliance, the media spotlight has fallen on the Saudi-Qatari spat.

The New York Times grumbled at length on the quarrels between the servants of empire. “For the West, this latest twist in the heated politics of the region divides close allies at a critical time,” wrote David Kirkpatrick on March 5. “All four [G]ulf countries actively back the Syrian rebels against President Bashar al-Asad, and all see Shiite Iran as a regional rival. But now the split with Qatar makes it harder for the West to work with them as a group on common concerns like Iran or Syria.”

And as the endgame in the Syria war is about destabilizing Iran and guaranteeing Israeli supremacy in the region, the US and its NATO allies have taken upon themselves to chastise the Arabian tribal feuding in the Gulf. “The gulf squabbling really does not help,” declared Michael Stephens of the London-based Royal United Services Institute. Iran, he said, is “the only one who wins from this.”

But that fragile alliance belies a seething jealousy born of feudal rivalry for primacy.

This is Arabian tribal feuding at its most puerile, a page from the annals of pre-Islamic beduoin history. As Finian Cunningham so aptly pointed out in an article for PressTV, “the despots [of both Saudi Arabia and Qatar] share the same Wahhabi dogmatism, and to a point they are allies in their agenda of animosity towards Shia Iran. But that fragile alliance belies a seething jealousy born of feudal rivalry for primacy.” Both Saudi Arabia and Qatar dream of primacy as regional hegemons of the Muslim East, exporting their tribal monarchies outward to the region at large.

Recently, tapes were released of Qatari and Libyan intelligence negotiations dating back 17 years, where the Qartaris are purportedly encouraging Muammar Qaddafi to assassinate then-Crown Prince Abdullah ibn ‘Abd al-‘Aziz. Saudi tempers flared — threats have been issued to Qatar on account of its meddling in “internal affairs.” Abdullah ibn ‘Abd al-‘Aziz’s court has gone so far as to threaten to slap Qatar with sanctions and seal borders. Qatar, the world’s largest producer of natural gas, imports most of its food, which means heavy reliance on its border with Saudi Arabia.

For its part, Saudi Arabia has displayed an equal interest in and a willingness to stick its finger in the inner workings of the Qatar government. It was partly due to Saudi machinations that the flamboyant Sheikh Hamad bin Khalifa al-Thani abdicated as ruling amir in favor of his son and heir apparent, Sheikh Tamim bin Hamad al-Thani. Tamim has been impeccably groomed in the finishing schools of Third World despots, namely, the UK’s Sherborne School and the Royal Military Academy at Sandhurst. He was also seen as more pro-Saudi than his father, whose willingness to spend Qatar gas lucre in investment and media projects considerably raised the international profile of the country.

However, even with Tamim’s ascension, it has become clear that the real power behind the throne remains the father Hamad, who with a group of tribal elders, continues to dictate the affairs of state. If Saudi Arabia expected that Tamim’s court would be pro-Saudi in the style of the Khalifa family in Bahrain, it has been disappointed. Shortly after the ascension, Hamad al-Thani described Qatar as a youthful and invigorated nation state, contrasting with a Saudi government composed of Aal Saud’s aging progeny that he described as “old and decrepit.” The image is being bolstered by ventures such as winning the right to host the 2022 Soccer World Cup, and buying flashy stakes in European companies and business ventures.

Both Qatar and Saudi Arabia are also leveraging their oil funds in order to become stakeholders of the new Muslim East, as envisioned in the war-rooms of the United States and Israel. Fabulous sums of money are being spent on who controls the new Syria, and the race is heating up between Saudi Arabia and Qatar. With respect to the US’ role as ringleader, Saudi Arabia has had a longer and more reliable track record of unctuously serving on behalf of US empire while Qatar is far more of a wild card — thus so far, NATO has been privileging Saudi interests. Qatar was incensed, for instance, at the election of Saudi protégé Ahmed Jabbar as head of the Syrian Coalition Forces, as the takfiri rebels burning down Syria are known.

The Brotherhood has become an outlawed organization in Egypt after the sinister General Abdel Fattah el-Sisi cracked down on the group after the Egyptian army’s coup and declared it a terrorist organization.

Another sticking point is Qatar’s position on the Muslim Brotherhood. The Brotherhood has become an outlawed organization in Egypt after the sinister General Abdel Fattah el-Sisi cracked down on the group after the Egyptian army’s coup and declared it a terrorist organization. While the United States publicly criticizes the Egyptian army’s iron fist against its own civilians, it is at the same time funneling billions of dollars in military aid to the army as support for its actions against the Brotherhood. US-Israeli interests dictate that Egypt must remain subservient to Israeli interests. As conciliatory as the Muslim Brotherhood’s foreign policy proved to be — for instance, President Mohamed Mursi chose to make his first international visit to Saudi Arabia — it simply was not a trustworthy ally in the project of ensuring Israeli hegemony in the region.

Saudi Arabia and the Muslim Brotherhood have held an uneasy partnership dating back to Gamal Abdel Nasser’s persecution of the group. Brotherhood scholars and activists found asylum in Saudi Arabia, and gained considerable influence over the civil societies of Saudi Arabia and the Gulf through their work in educational and charitable enterprises. Following the Brotherhood’s sweep of the Egyptian elections in June 2012, they repaid the favor by sharing power with Saudi-Salafi political groups that opened offices in Egypt. However, after the US blacklisted the Brotherhood, Saudi Arabia has been swift to stab the organization in its back.

Shortly after el-Sisi branded the Brotherhood a terrorist organization, Saudi Arabia followed suit. On February 4, 2014, King Abdullah passed a royal decree announcing that “belonging to intellectual or religious trends or groups that are extremist or categorized as terrorist at the local, regional or international level, as well supporting them, or showing sympathy for their ideas and methods in whichever way, or expressing support for them through whichever means, or offering them financial or moral support, or inciting others to do any of this or promoting any such actions in word or writing” will be punished by a prison sentence “of no less than three years and no more than twenty years.” This effectively does the work of banning the Muslim Brotherhood inside Saudi Arabia and its sphere of influence.

Qatar, however, has followed the policy of spreading its eggs in different baskets in order to gain a broad base of support. The Muslim Brotherhood ideologue Yusuf al-Qardawi still resides in Qatar, and the Qatari middle class has ties to Ikhwan educational and civil organizations. Qatar is refusing to ban the Muslim Brotherhood, leading Saudi Arabia to throw down the gauntlet before the Qataris and insist that they toe the line of the Saud family. Qatar’s satellite channel al-Jazeera — which won international recognition for its coverage of the Egyptian revolution — is closely tied to the Brotherhood brain trust in the Persian Gulf. Saudi Arabia is demanding that Qatar close down al-Jazeera and two think tanks in order to win back Saudi favor.

The Qatar and Saudi states are on steroids of deranged power — the mix of ignorant tribalism and oil-fueled absolute monarchy have proven to be as disastrous for the Muslim East as a Molotov cocktail lobbed in a library. Both are being encouraged by the US to orchestrate an offensive by rebels in southern Syria — and Saudi officials are reported to be offering the rebel fighters anti-aircraft missiles to fend off al-Asad’s army. Saudi preachers on satellite TV continue to call for anti-Shi‘ah jihad in Syria. While Saudi Arabia seeks to globalize Wahhabism and destroy the fabric of Muslim societies in favor of its power penetration in the Muslim world, Qatar’s sinister power-brokering is no less poisonous. The next chapter of the Syrian war will center on the outcome of Arabian tribal feuding with NATO high-tech weaponry. 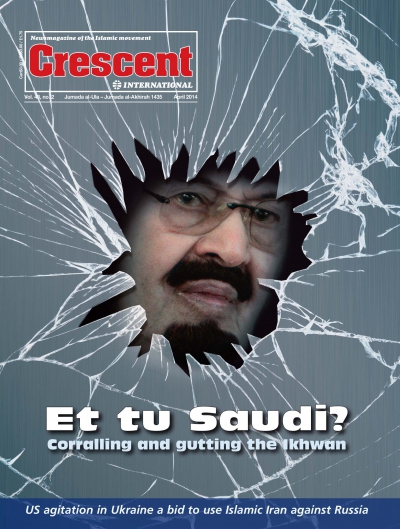 King Salman’s dismissal of Crown Prince Mohammed bin Nayef and elevation of his own son Mohammed bin Salman to the post while widely expec... 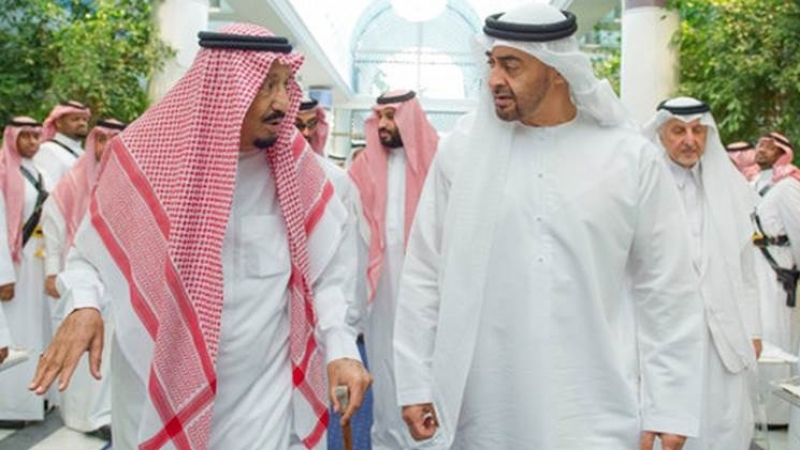 The fickle Arabian rulers are at each other’s throats again. They are worse than children as shown by the pathetic spat between Saudi Arab...

When two quarrel, both are in the wrong

The Saudis first launched their sectarian crusade against the Islamic Republic of Iran, now they have gone after Qatar, a fellow Wahhabi bas...

Calling for reforms is “terrorism,” withdrawing your allegiance to the monarchy is “treason” and contacting international news organ...