Hush money for Yemeni families of US drone strike victims

Without admitting that it has murdered innocent civilians, the US government has been handing out “bags of cash” to victims' families of US drone strikes in Yemen. One outspoken family member took the money but distributed it among families struggling after the loss of loved ones. Evidence of US hush money was provided by lawyers for Reprieve, the British organization looking into US drone strike victims.

Some Yemeni families that lost family members to US drone strikes have received “hush money” from US sources. The aim is to pressure them into remaining quiet.

The Qatari-based network, Al Jazeera reported on its website: “International human rights organization Reprieve sent Al Jazeera a series of documents, including bank transfers, detailing the release of roughly $100,000 in cash to compensate bin [Yemeni] Ali Jaber for his losses. Among the documents are bank notices without signatures from creditors.”

The money was given to Jaber by the US government.

Ali Jaber is a Yemeni citizen who works in his country’s environmental agency. His brother-in-law and nephew were killed in a US drone strike in 2012.

These two casualties were dubbed “collateral damage” who lost their lives because the US was targeting three Yemenis in the village.

Educated and articulate, Jaber denounced the attacks and castigated the US for killing innocent civilians.

The US contacted Jaber and paid him the “hush money” in order to stop him from talking about the incident.

Jaber took the money but not for himself. He helped several families in his village suffering financial harship, especially after losing their breadwinners through drone strikes. However, he is still speaking out against drones.

“President Obama is as reluctant as ever to admit the full extent of the US drone program in Yemen — but money talks, even if the White House won’t,” said Cori Crider, Reprieve attorney who represents Bin Ali Jaber.

Namir Shabibi, a caseworker on Reprieve’s Abuses in Counter-terrorism team said that such cases as Jaber’s, where the US is forced to pay indemnity in order to avoid a public relations crisis, is not going to stop the reckless, indiscriminate violence through drone strikes.

“It’s small claims in the US coffers — probably loose change, you can call it,” said Shabibi.

The US will occasionally pay the victims of drone strikes in order to contain public relations fallout to its image.

One of the most prominent examples is a December 2013 strike at a Yemeni wedding party. The victims’ families were secretly compensated almost $1 million.

In public, the US tries to distance itself from these acts of compensation, because it would mean admitting wrong-doing and would disrupt the grand narrative that it is doing just war against a faceless enemy.

Reader Sarah Salim finds it heart-breaking that the people of Yemen have been virtually forgotten despite being subjected to such terrible s...

Every 10 minutes a child dies in Yemen because of the total siege imposed by the US-UK-Saudi and their allies. There is also widespread fami... 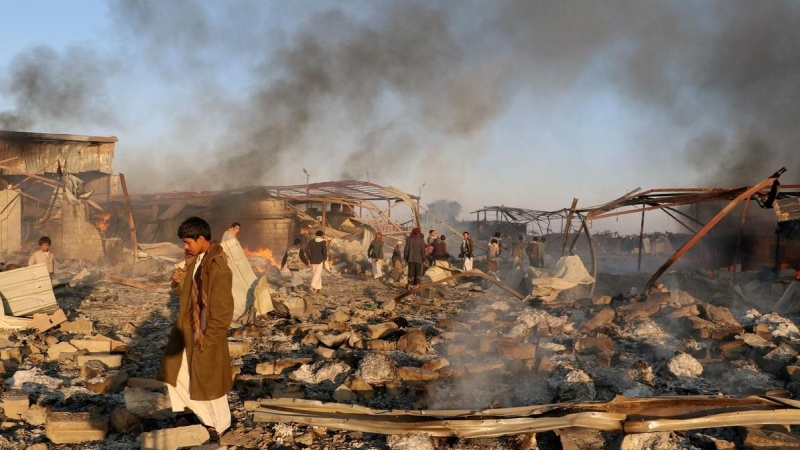 The Saudi-led war on Yemen has caused massive civilian casualties and led to the greatest humanitarian disaster in history. The Bani Saud ar...

Hiding under the protective umbrella of imperialism and Zionism, the Bani Saud are moving full speed ahead with the crimes both at home and ...