Home / French recognition of Armenian ‘genocide’ by Turkey against Azerbaijan

French recognition of Armenian ‘genocide’ by Turkey against Azerbaijan

The French senate is set to consider a bill passed by the French National Assembly which recognizes the alleged genocide of Armenians by Turks during the first world war. This unnecessary hostile act is not so much directed against Turkey as it is against Azerbaijan, which is locked in a bitter war with Armenia over land. The idea is that genocide should do for Armenians what the holocaust did for the Zionists, who used it to steal Palestine.

Already, western propaganda has tried to present Armenia - which is occupying one-tenth of Azerbaijani territory - as the victim of aggression, arguing that Yerevan was provoked by the economic blockade Baku had imposed on it, following the collapse of the Soviet Union of which both were members.

The bill, adopted by the National Assembly on May 29, states: ‘France publicly recognizes the Armenian genocide of 1915.’ The measure was passed despite an appeal by Turkey to France on the preceding day not to do so. ‘It would be a grave mistake,’ the Turkish foreign ministry spokesman, Necati Utkan, said. ‘It is not possible or correct to pin the genocide label on Turkey over the sorrowful events which occurred during world war I.’ But it was indeed possible to fasten the label on Turkey, and the national assembly formally did that when it adopted the bill - a step that forced the Turkish president Suleyman Demirel to ask his French counterpart, Jacques Chirac to intervene. ‘I believe it would be effective if you used your influence on the legislative bodies,’ he said in a letter to Chirac.

The bill is due to be discussed in the French senate, the upper house of parliament. Armenia claims that some 1.5 million Armenians were massacred by Turks by order of the Ottoman Empire in 1915. According to Turkey, thousands of Turks and Armenians died in fighting between the two sides in what is eastern Turkey and Syria.

The Greek foreign minister Theodore Pangolos said on June 13 that his country would take certain trade measures against the French. ‘I can say to you, at least in so far as Athens plans to buy 40 French warplanes (Mirage 2000) are concerned, that the French will not secure a deal since it will be difficult for the Greek government to agree on when public opinion is opposed to any transaction with the French,’ he said. French and Greek ties have been strained since Pangolos accused the French president Jacques Chirac last April of adopting a position more favourable to Ankara then to Athens.

The obvious conclusion from this is that the French recognition of the Armenian ‘genocide’ is calculated to advance the cause of Armenia rather than to hurt Turkish interests. The powerful Armenian lobby in the west as well as Russia is bound to seize this rare opportunity to give moral authority to Yerevan’s aggression against Baku. Western governments, Russian and international organizations concerned with the conflict have already sided with Armenia.

Russia has a 25-year defence and co-operation pact with Armenia and supplies its arms. The Organization for Security and Co-operation in Europe (OSCE), which is supposed to mediate in the Azerbaijani-Armenian conflict is far from impartial and favours Yerevan. The United Nations security council is also on the whole favourable to Armenia. All the governments, groups and international organizations already siding with Armenia will find both comfort and encouragement in the French move. The Swiss-based Christian Solidarity International, which has been drumming up support for Christian Armenia against Muslim Azerbaijan, will use it to step up its crusade.

If the Jews of Europe were given at the end of world war two a homeland in Palestine which they were helped to expand because of the holocaust, Yerevan’s friends will now argue that the victims of the genocide by Turkey, must be helped to hang on to Karabakh and the other Azerbaijani territories seized by Yerevan to connect the province with mainland Armenia.

Azerbaijan will need concerted action from Muslim States to help convince France not to sign the genocide bill into law. Such legal recognition would constitute a dangerous precedent. There are already several countries in Europe which make the denial of the holocaust a criminal offence. It would not be long before similar laws are passed in respect of the alleged Armenian genocide.

The Ottoman Caliphate would then be equated with Hitler’s Germany - a monstrous distortion all Muslims must work to resist. An immediately helpful step would be the improvement of relations between Iran and Azerbaijan. This would send a clear signal not only to the French but also to Armenia, with whom Tehran maintains good relations.

But these steps cannot be a substitute for a high-profile and effective diplomatic and military support by the member States of the Organization of Islamic Conference (OIC) for Azerbaijan to enable it to free the Muslim lands Yerevan, with kufr help, has seized.

Displaying characteristic arrogance and imperial over-reach, the US not only sent its troops for exercises into Uzbekistan but also got such...

Islamic Iran in the Azeri-Karabakh-Armenia triangle

One of the ways through which the enemies of Iran attempt to discredit its Islamic credentials is by “exposing” its relations with Armen... 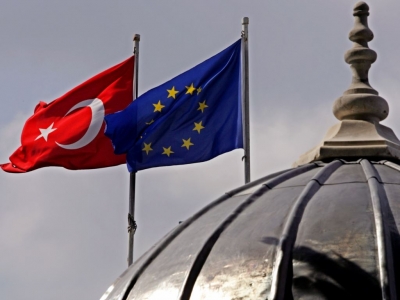 According to a poll published on October 24, only 32 percent of Turks still want to join the European Union: less than half of those who wer...