As the Syrian army makes steady gains against the Saudi-Turkish-Israeli-American backed terrorists, some of the terrorists' backers have freaked out. There are reports that Turkey might launch a direct ground invasion of Syria with frightening consequences for the region. Even the incompetent but brutal Saudis have said they would send their troops into Syria. There seems to be no limit to the madness of these rulers.

Has Turkish President Recep Tayip Erdogan lost his mind? There are reports that he is planning a ground invasion of Syria ostensibly to fight the takfiri terrorists but in reality to vent frustration at the failure of the Ankara-backed terrorists to overthrow the government of President Bashar al Asad.

Thanks to Russian air strikes against terrorist strongholds, the Syrian army has driven the terrorists from many strategic towns and cities in Aleppo, Latakia, Hama and Homs provinces. It was the prospect of total defeat of their favorite terrorists coupled with the fact that the Kurds in Syria were also consolidating their positions in the border regions with Turkey that Erdogan is mulling a ground invasion.

A day after the Geneva talks collapsed February 3, Russian Defense Ministry spokesman Igor Konashenkov said: “We have good reasons to believe that Turkey is actively preparing for a military invasion of a sovereign state – the Syrian Arab Republic. We’re detecting more and more signs of Turkish armed forces being engaged in covert preparations for direct military actions in Syria.” The Turks denied the charge but the UN and US maintained a pregnant silence indicating something was being cooked up.

The Saudi regime also announced on February 4 that it was willing to send ground troops to Syria as part of the western coalition, again ostensibly to fight the takfiri terrorists. If so, they have a strange way of doing so. The proximity talks in Geneva under UN auspices collapsed because the Saudis, Turks and the Americans put certain preconditions—Russia must stop its air strikes against the terrorists as well as allow two terrorist groups, Jaysh al-Islam and Ahrar al Sham to attend the Geneva talks—that doomed them from the beginning.

In fact the talks never got off the ground because the Saudi-backed groups’ demands were totally preposterous. They also demanded the ouster of Asad from power. What they could not achieve on the battlefield, they hoped they could do so under the UN umbrella in Geneva.

Syria and Russia would have none of this, hence the Saudi and Turkish plans for a ground invasion. Turkey’s main opposition party, the Republican People’s Party (CHP), also sounded the alarm at Erdogan’s irresponsible policies that have resulted in a string of failures.

Syrian Foreign Minister Walid al-Muallem made clear that any such invasion would be totally illegal. He warned that the invaders would return in wooden coffins to their countries.

The Saudis are not known for their military prowess. They can only target and kill unarmed civilians. Syria is a different ballgame. Were they to make such a mistake, the Saudis would only hasten their own demise, or more precisely, the demise of Bani Saud that have illegally occupied the Arabian Peninsula for nearly a century.

The Turkish army is more professional but they would clearly be coming up against the Russian air force as well as their S-400 missile batteries in Syria. Has Erdogan taken that into account or does he believe his Nato allies will bail him out?

Nato is unlikely to take on Russia and, therefore, risk a nuclear war over Syria. The overthrow of Bashar al Asad is an important part of the military alliance’s destabilizing plan but it is not so important as to risk a nuclear exchange or start World War Three.

Erdogan’s real problem is with the Kurds, both in Turkey and Syria. He tore the peace deal with the Kurdistan Workers Party (PKK) that he himself had initiated in 2012 and re-launched his war against them. He wants to do the same in Syria by occupying Syrian territory that is under the control of the Kurds. It is also the region that the terrorists have occupied.

Syrian army and Kurdish guerrillas’ advances in the border region have given Erdogan serious heartburn. He wants to use his military to crush the Kurds in Syria as well ignoring the fact that this would amount to a declaration of war.

His megalomaniac policies are pushing the region toward total war whose consequences would be truly frightening. Erdogan, however, seems to ignore all such warnings and is rushing headlong into this madness.

Unable to get out of the hole he has dug for himself in Syria, Turkish President Recep Tayip Erdogan has started thrashing about violently. ...

Gloomy prospects for AKP after elections

The AKP has suffered a serious setback in last month’s elections and its hold on power is no longer assured. 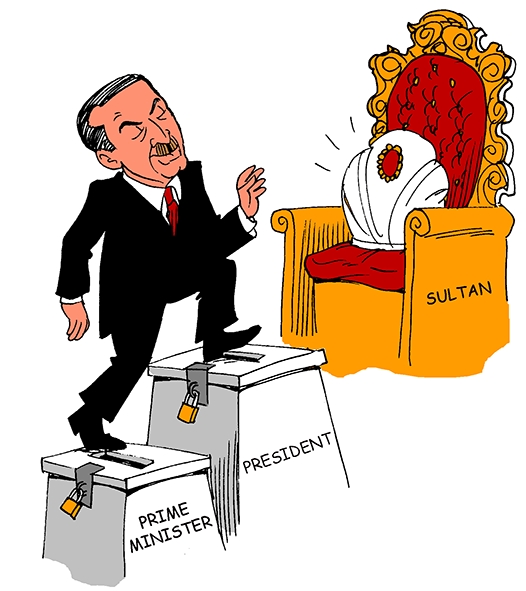 By his ill-conceived policies, Turkish President Recep Tayip Erogan has brought the war on Syria into his own country. The Turks will pay a ...

To secure Turkey’s exit from Syria, do not humiliate it anymore