The long-awaited report on the massacre of 8,000 Muslim men and boys by Serb forces in the UN ‘safe haven’ of Srebrenica in 1995 blames the Dutch government, its army and the UN for the genocide. Prepared by the Netherlands Institute for War Documents (NIOD) and published on April 10, the 7,000-page document strongly criticises the government for sending ill-prepared troops on a vaguely defined mission to the UN safe haven; it also censures the UN for failing to provide the Dutch battalion with the backing it needed to protect the Muslim population. But it does not stop at that: it accuses the international community of ‘muddling through’ the Balkan crisis, the Americans of smuggling arms to Bosnian Muslims, and Srebrenica’s Muslims of organising attacks against Serbs. The report has been described as a ‘whitewash’ by some, and has aroused outrage among Bosnian Muslims, who are even accused indirectly of partially inviting the massacre.

It has taken the NIOD since 1996 to reach these conclusions, which are as unconvincing as the evidence cited to justify them. The report argues that “humanitarian motivation” played a role in driving the Dutch government to send an ill-prepared peace mission to a war-torn region. In particular, 110 lightly armed peacekeepers were dispatched to “keep the peace where there was no peace”, and the Dutch government and military made no effort to find out what the situation really was, from the Canadians whom they were replacing. Consequently, Srebrenica fell without a shot being fired.

But the report does not blame the Dutch soldiers on the scene for failing to stand up to General Ratko Mladic’s men, who massacred 8,000 out of 30,000 Muslim refugees whom the Dutch were supposed to protect. Outgunned and outnumbered, the Dutch were “caught between two fires”, and saw their own survival, rather than the safety of the Muslims, as the central issue, it asserts. The report argues that the soldiers believed the UN would bomb the Serb forces in order to protect the refugees, and concludes that there is no evidence that they witnessed any massacre. It even defends them against the accusation that they did not care about the fate of the Muslims, which was made when a film showed troops drinking beer in Zagreb. “The nature and scale of the mass killings were not yet known, let alone fully realised,” it says, adding that the “partying was the spontaneous release of emotions after a very moving memorial service for dead colleagues.”

The report reserves most of its ire for the Dutch government and the army command, accusing the former of not allocating enough resources to intelligence and the latter of rejecting a CIA offer of equipment to tap the Serb forces’ communications. But while it is fair to criticise both the government and the army, the emphasis on the lack of intelligence resources implies indirectly that they and the Dutch peacekeepers are innocent of the charge that they left the Muslim refugees to their fate because they had no idea of what atrocities the Serb forces had been planning. It must have been common knowledge at the time that the Serbs would, given a chance, target Muslims on a large scale. Srebrenica was, after all, known to be a flashpoint of the 1992-95 war, and had been made a ‘safe haven’ for that reason.

Another conclusion reached by the report – which holds the UN equally responsible – has been dismissed as an attempt to dilute the Netherlands’ responsibility for failure to protect Srebrenica’s Muslims. A spokesman for the International Peace Council said during a BBC World Service interview on April 10 that declaring both equally guilty meant that no one was responsible, which is unacceptable. But another attempt at dilution which is even more indefensible is made in the conclusion that not all the victims were innocent. In particular, “Muslim troops” are accused of launching attacks against Serb forces and of treating Serbs badly – indirectly suggesting that the Dutch soldiers were not wholly at fault for leaving the Muslims to their fate, which they brought upon themselves.

The criticism of the Dutch government and army was, however, strong enough to induce the resignation of Prime Minister Wim Kok’s cabinet and of the Army chief of staff, General Ad van Baal. Kok was prime minister in 1995, and van Baal was the number two officer in the Dutch army at the time, although the report’s criticism is confined to the past government and army and does not blame the current leadership. Kok was also deputy prime minister nine years ago when the Dutch peacekeepers were sent to Srebrenica. The cabinet resigned on April 16 saying that it could have done more to stop the massacres, and General van Baal stepped down the following day.

But the resignations came seven years after the ‘ethnic cleansing’ of the Bosnian Muslims, and only three weeks before a general election. The election is on May 10 and the cabinet would have been out of office before then anyway. Queen Beatrix accepted its resignation but asked it to continue as a caretaker government. Another reason why Kok cannot claim credit for resigning is that two members of his cabinet had announced earlier that they would resign, and one member of the three-party coalition government announced that it was quitting, and actually began negotiations with opposition parties.

Moreover the outgoing government has not said anything about the Netherlands’ or the UN’s responsibility for paying the victims’ relatives the compensation they are entitled to. Nor has it taken any steps to force the Serbs to make amends of any sort. Another grievance that the Netherlands, the UN and the so-called international community are not addressing is their failure to help identify the 4,000 bodies that the Serbs dumped in mass graves and which have been discovered since. The international effort to identify them is underfunded; the Dutch government only pays £1m a year: a puny sum considering the size of the task.

The US government, which has been accused by the report of smuggling arms to Bosnian Muslims, pays millions of dollars in aid every year to the Serb-dominated former Yugoslavia. Yet it is in no mood to help the effort to identify victims; instead, it claims that its threat to withhold aid has forced the Serbs to pass a law calling for the arrest of the men responsible for the genocide. But so far only one general has surrendered to the Hague, and Mladic, who directed the massacres, and Radovan Karadzic, his political boss, are still at large. This readiness to ignore Muslims’ grievances suggests that Muslims are considered expendable, particularly when it is compared with the payment of compensation to victims of the Holocaust and to Chinese victims of Japanese aggression (also in 1939-45). A Japanese court has recently ruled that Japan must pay compensation to Chinese PoWs who were used as slaves. More seriously, the neglect of Muslim victims of a genocide that occurred only seven years ago is suspiciously like the indifference of the ‘international community’ to the war crimes just committed against Palestinians – particularly in Jenin refugee-camp, which is being compared by many with Srebrenica.

The first point any informed reader will note about this book is that Malcolm uses the Serbian form ‘Kosovo’ throughout in preference to...

A number of works on different aspects of the Balkan wars have highlighted the role of the Serbian nationalist media is misinforming the Ser... 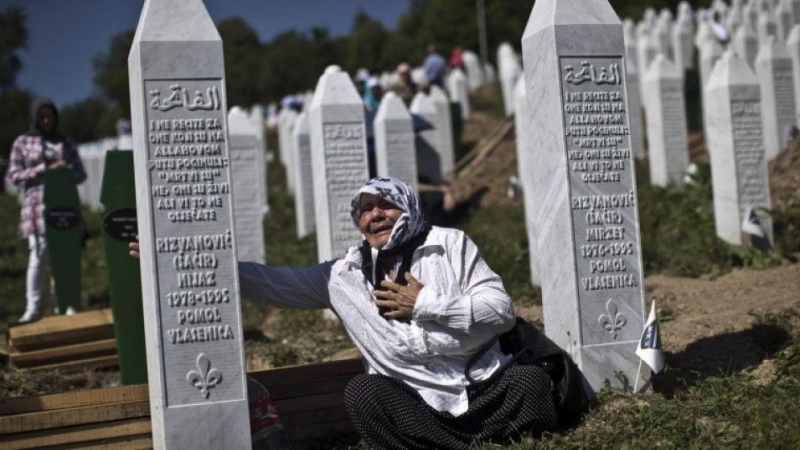 Twenty-five years ago, a horrific crime was perpetrated by the Serbs against Muslims in the heart of Europe in Srebrenica. Thousands of Musl...

Elusive truth of genocide in Srebrenica

The arrest last month in Serbia of Slobodan Milosevic on corruption charges has aroused hopes that he might one day be brought to the Hague ...