Americans have total contempt for Congress

Repeated polls have shown that Americans have complete contempt for Congress. The latest Gallup poll shows that only 9% of Americans approve of Congress. This means a massive 91% disapprove of the legislative body. Americans are also beginning to realize that its members are corrupt, and morally bankrupt. So much for American democracy that it wants to export to the rest of the world using cruise missiles.

Members of the US Congress claim it is the most august body in the world where the most powerful men and women sit and make decisions virtually for the whole world. The corporate media also peddle this fiction and provide members of Congress ample air time to pontificate about important issues on the idiot box (aka television).

It should, therefore, follow, that these men and women would be honorable in character and liked by the American people that ostensibly elected them to office.

Yet, according to the latest Gallup poll released today, only 9 percent of Americans approve of the legislative body. This low number is a drop of 1% from the previous low of 10 percent that was registered in October and is the lowest level recorded in the polling organization’s 39 years.

What is the political spread for such massive contempt among Americans?

Gallup polled 1,039 national adults, and the survey contains a 4-percent margin of error, according to The Hill, the newspaper that reports on Congressional affairs.

Why do Americans have such strong aversion toward a body that they themselves elected and do so regularly after every few years? First, Americans in large numbers are turning away from participating in the political process because they believe it makes no difference to their lives as to who sits in Congress.

There is also growing realization among Americans that members of Congress are not only corrupt, almost everyone of them is also in the pocket of some lobby group. The most powerful lobby in the United States is the Jewish lobby that has bought virtually every member of congress.

Instead of representing the interests of the American people, virtually every member of Congress competes to serve Zionist interests.

Pat Buchanan, a one-time speechwriter for former President Ronald Reagan, and himself a contender for the Republican Party nomination for president, famously called the Congress ‘Zionist occupied territory’. Nobody has improved on this description in all these years.

Congressional approval ratings have been steadily declining over the years as Americans have come to realize that their elected representatives are not only corrupt and thoroughly dishonest, but many of them are also morally bankrupt.

The question that must be asked is, why do Americans bother to vote for such a bunch of corrupt and criminal gang? Why don’t they storm the building, throw the rascals out and set the building on fire?

The bonfire may provide a few days’ of comic relief and then the whole thing would be forgotten. No American would the worse for it.

The challenge for the American people is to break the Israeli lobby’s grip on their political system.

Rallies against War On Syria

Millions of people across the US and Canada plan to march against the US war on Syria. An attack on Syria appears imminent despite massive o... 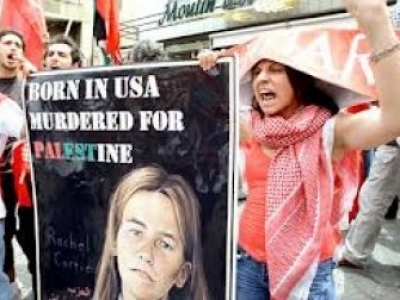 The US government has not commented on the scandalous verdict even when relating to one of its own citizens killed—crushed to death—by a...