America’s dogs of war are straining at the leash. Led by US ambassador at the UN Nirmata Kaur Randhawa (who changed her name to Nikki Haley to sound more American), they want more wars and are pushing the moron Donald Trump to launch one against Syria even though the generals are reluctant to do so.

The reason is the alleged chemical weapons attack in Douma on April 8. No evidence has been presented but that has never constrained the war dogs. The allegations come from the takfiri terrorists and their sympathizers, the so-called White Helmets, an outfit created by a British mercenary. They are on the verge of complete defeat in the Damascus suburbs.

The terrorists have been driven out of all of Eastern Ghouta except Douma. There too, an evacuation agreement had been arrived at but on Saturday April 8, they broke it by firing missiles at Damascus, the Syrian capital. Then came the chemical weapons attack allegation.

The war dogs put further pressure on Trump when on April 9 the FBI raided the home, offices and hotel room of his personal lawyer Michael Cohen, seizing files and communications. The stated purpose of the raid had to do with the payment of hush money to a prostitute, Stormy Daniels. Trump had an affair with her—what else is new?—but she was paid $130,000 to keep her mouth shut during the election campaign.

Daniels revealed that Cohen had paid her the hush money but the Special Prosecutor Robert Mueller who is investigating allegations of Russian manipulation of 2016 presidential elections wants to find out whether any money from Trump’s campaign fund was used to pay Daniels.

Outwardly the threat of US attack on Syria and allegations of Russian interference may not be related but the timing of the FBI raid raises suspicions.

Trump is being pressured into following the war dogs’ wishes for an attack on Syria (he called the Syrian President ‘Animal Asad’ in his usual tweet) in return for holding back on the investigations.

This is also what Trump was forced to do in April 2017 when he fired 59 cruise missiles at Syria’s Shayrat air base, again over alleged chemical weapons’ attack by Asad’s government that later turned out to be false.

As a prelude to America’s attack on Syria—completely illegal according to US and International Law as per International Law Expert, Professor Francis Boyle—Israel on April 9 launched missiles against a Syrian airbase near Homs, killing at least 14 people.

The Washington Post claimed Israel’s air strikes destroyed a considerable portion of the Syrian air force. The Zionist regime, like its godfather the US, acts illegally and as an outlaw.

Dr Ali Akbar Velayati, advisor to the Rahbar, Imam Seyyed Ali Khamenei of Iran said on April 11 that the Zionist crime against Syria would not go unpunished.

Trump has assembled an assortment of war criminals and gangsters into his cabinet and in the White House (John Bolton) that have war on their minds. Additional pressure is exerted by other warlords in the think-tanks, Congress and the media to go all out for war.

The Washington Post said on April 11, The Post declared on April 11: “[T]he reality Mr. Trump has not yet faced is that as long as the dictator he called ‘Animal Assad’ remains in place, Syria’s wars will continue.” The Post will be satisfied with nothing less than the overthrow of a legitimately elected leader of a foreign country.

Feeling the heat from the war dogs, Trump on April 10 canceled his trip to the Summit of the Americas in Peru, and his Secretary of War General James ‘Maddog’ Mattis canceled his trip to San Francisco scheduled for April 14. Threats of action within “24 or 48 hours” are getting louder.

When Russia proposed at the UN that inspectors from the Organization for the Prevention of Chemical Warfare (OPCW) be allowed to enter the area of East Ghouta to investigate allegations of the use of chemical weapons, Haley dismissed it.

Instead, the US says it wants an ‘independent inquiry’ (meaning people selected by the US and its allies that will deliver the verdict they want).

Both Russia that has a significant military presence in the area and the Syrian government have categorically denied using any chemical weapons.

Syria has no reason to use such weapons when its forces have nearly routed all the terrorists from the area. The only beneficiaries of such an allegation are the US-Israel-Saudi-backed terrorists.

It is quite revealing to note that on April 2 (less than week earlier), US-backed Afghan helicopters bombed a graduation ceremony of students in Kunduz in which nearly 400 children and their parents were slaughtered.

The same Western regimes and their pliant media that are demanding military action over allegations of use of chemical weapons in Syria are silent about the slaughter of innocent Afghan children.

This is obscene and reveals the true nature of the war dogs in Washington and beyond.

With Syria having signed on the Chemical Weapons Ban Treaty, it is time to divest the Zionist entity of its massive arsenal of nuclear weapo... 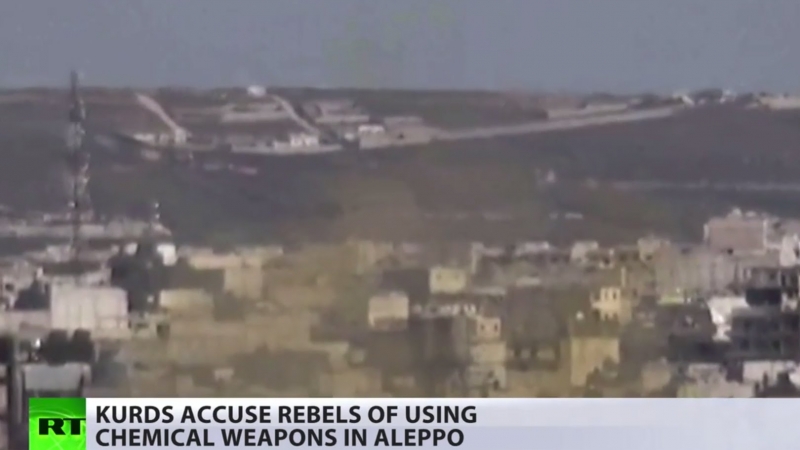 Terrorists use chemical weapons against civilians in Aleppo

On the run from the Syrian army and its allies, the takfiri terrorists have once again resorted to using chemical weapons. There is, however...

No outrage, only barely repressed yawn in the West over terrorist slaughter of Syrian civilians

What is certain is that if a massacre can be spun into blaming the Syrian government, it will be repeated endlessly with screaming headlines...

For weeks, the Western corporate media was reporting the ‘use of chemical weapons’ by the Syrian government but when the Syrian army dis...