Afghanistan's two 'presidents': looking in opposite directions. Their smiles are totally fake. They hate each other and considers the other a fraud. For now the US has annointed Ashraf Ghani as president but the double-barrel Abdullah is not amused. He held his own swearing-in ceremony as 'president' while Ghani was being sworn in in the presidential palace in Kabul. Rockets were fired at Ghani's swearing-in and guests fled in panic even as Ghani tried to calm them.

At a time when they should be looking for ways to flee the country, Ashraf Ghani and Abdullah Abdullah both claim to be the ‘president’ of Afghanistan.

To press their rival claims, both held separate swearing-in ceremonies almost within shouting distance of each other on Monday March 09 in Kabul. Rockets landed near the presidential palace as Ghani's swearing-in ceremony concluded. Guests fled in panic even as Ghani tried to ask them to stay.

Can the two ceremonies be described as foolishness, madness or both?

With the Taliban breathing down their necks, why would anyone want to occupy the nominal office of president in a country where neither has control even over most parts of Kabul, the capital city, much less the country?

And what do they hope to achieve by claiming a seat that will not be theirs for too long anyway?

The Trump regime, wishing to avoid having to deal with another headache, said it opposed “action to establish a parallel government”.

This was seen as rejection of the double-barrel Abdullah’s separate bid and an apparent nod to Ghani’s presidency.

Afghanistan had faced a similar impasse after the 2014 presidential elections when both claimed victory.

Enter then US Secretary of State John Kerry who proposed a new post for Abdullah. He appointed him Chief Executive Officer (CEO) while Ghani was made president.

This was a novel idea: Afghanistan was no longer a country but a ‘corporation’.

The deal was that after two years, Ghani would vacate the presidency for Abdullah to move in.

Nothing of the sort happened and the Kerry created two-headed donkey, one head at each end of the body, continued to pull Afghanistan in different directions.

Six years ago, however, the Taliban did not control 70 percent of the country. Nor was the US prepared to withdraw its troops yet.

In fact, then President Barack Obama was persuaded by his generals to increase troop levels and negotiate with the Taliban from a position of strength.

Successive US regimes have pursued the mirage of the “position of strength” only to be humiliated in the process.

While campaigning for presidency in 2016, Trump had pledged to withdraw troops from distant lands.

Having failed elsewhere—Iraq, Syria etc—Trump is desperate to get troops out of Afghanistan.

This has become even more pressing in view of the US presidential elections in November.

He would like to present the troop withdrawal—even if partial—as fulfillment of his promise.

Col Sonny Leggett, a spokesman for US forces in Afghanistan, announced today the first phase of the American withdrawal.

A similar reduction will occur among Nato troops.

According to the February 29 US-Taliban deal, all foreign troops would be out of Afghanistan in 14 months.

Whether this would be fulfilled is a moot point but until the US presidential elections in November, the chances are Trump would uphold the agreement.

In the meantime, the Taliban will wait and see who emerges from the contest between Ghani and Abdullah.

They have also said they would not accept anyone representing the Afghan government that they consider a US puppet.

Instead, they are prepared to talk to Afghans in their personal capacity in the intra-Afghan talks that are due to begin on Tuesday, March 10.

Informed observers are worried that the Ghani-Abdullah rivalry would “gravely affect the government’s position in the upcoming intra-Afghan talks.”

The Taliban could rightly tell the Americans that their imposed political system is in shambles.

They cannot even decide who the president is. If they are fighting over the post like children, why should the Taliban take them seriously and accept such a system?

The first Battle of Kunduz took place from April to October 2015 for control of the city, where Taliban forces were playing cat and mouse fo... 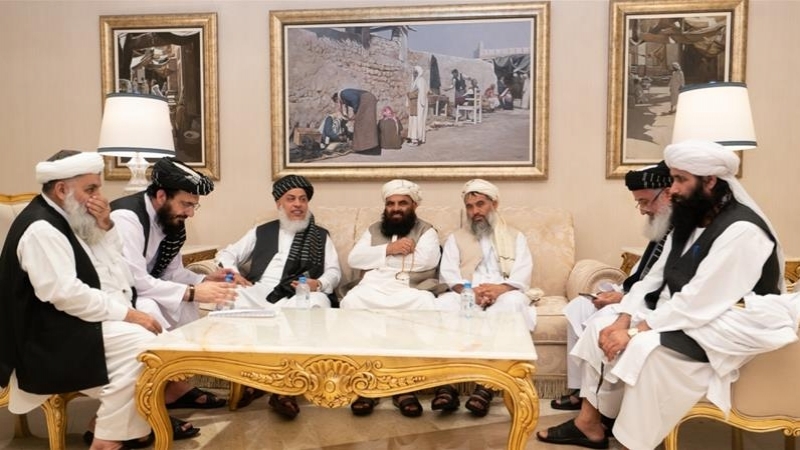 From Gitmo to Camp David (almost): The Taliban's long journey

There may be a faint light at the end of Afghanistan’s long dark tunnel. Two neighbours—China and Pakistan—have indicated they would l...

The US-crafted Afghan regime with two rulers—a president and a chief executive—had little chance of success. It is coming unhinged amid ...