It was in December 2006 that the Ethiopian army – with the US’s military and financial support – invaded Somalia and paved the way for the expulsion of the Union of Islamic Courts (UIC) and its replacement by the clan-based interim government (IG). Now it is once again pouring its troops into Mogadishu, the capital of Somalia, to prop up the IG (which has foundered as a result of a dispute between its president, Abdullahi Yusuf Ahmed, and prime minister Ali Mohamed Ghedi) and to prevent the UIC from seizing power. 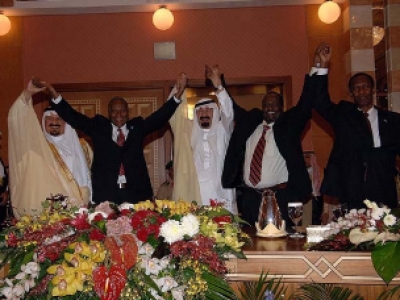 The last thing a Muslim country like Somalia – which has been in the grip of turmoil and lawlessness for 16 years and is now under occupation by Ethiopian and US forces – needs is intervention in its turbulent affairs by Muslim governments, such as Saudi Arabia and Egypt, that are allies of the US and back its anti-Islamic programme in the Horn of Africa. Yet that is exactly what took place in mid-September, when three top leaders of the so-called Somali interim government (IG) and 300 clan heads (warlords, most of them) gathered in Jeddah and signed a “national reconciliation pact”, as the minority accord was presented.