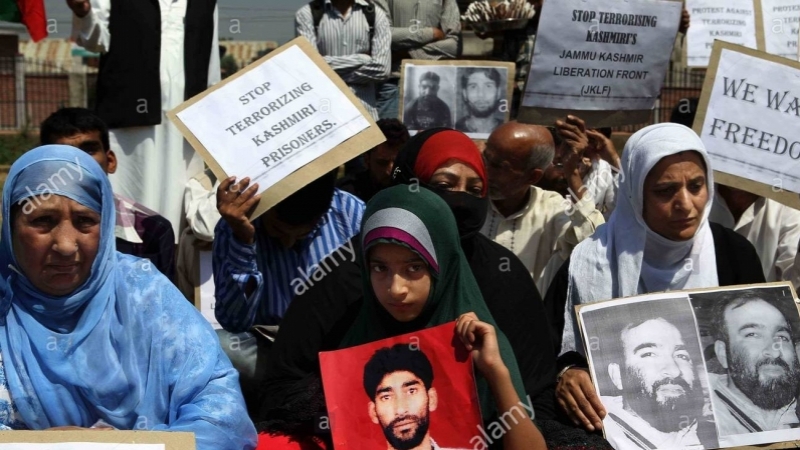 He called for a “very close look” at the continued incarceration of Kashmiris in Indian prisons as the deadly coronavirus spreads alarmingly in India.

“The secretary-general, as we have said before, believes that member states need to take very close look at incarcerations during a time of Covid-19,” his spokesman, Stephane Dujarris said in response to a question by the Associated Press of Pakistan (APP).

The APP had drawn attention of the UN chief to joint call by six international human rights organizations for the release of “arbitrarily arrested” Kashmiris.

Dujarris added that the UN High Commissioner for Human Rights, Michelle Bachelet, had also called on governments to “examine ways to release those particularly vulnerable to COVID-19, among them older detainees and those who are sick, as well as low-risk offenders.”

Noting the recent steps taken by Indian authorities to decongest prisons, the joint statement by the six human rights organizations said, “The fate of hundreds of arbitrarily detained Kashmiri prisoners hangs in the balance as the number of confirmed cases of coronavirus in India passes the 4,000 mark [now in excess of 5300 cases with at least 150 deaths, as of 17:02 GMT April 7, according to worldometer.info] and many more are likely to remain undetected or unreported.

“Inmates and prison staff, who live in confined spaces and in close proximity with others, remain extremely vulnerable to COVID-19.”

While the Modi regime has instructed its 1.3 billion people to respect social isolation and hygiene rules, basic measures like hand washing – let alone physical distancing – are just not possible for prisoners.

Indian prisons are overcrowded and appallingly unhygienic. Unfortunately, basic hygiene is totally lacking in the rest of India as well.

“Under international law, India has an obligation to ensure the physical and mental health and well-being of inmates. However, with an occupancy rate of over 117%, precarious hygienic conditions and inadequate health services, the overcrowded Indian prisons constitute the perfect environment for the spread of coronavirus,” the human rights organizations warned.

“In a bid to contain the spread of the disease among inmates and prison staff, the Supreme Court [of India] asked state governments on March 23 to take steps to decongest the country’s prison system by considering granting parole to those convicted or charged with offences carrying jail terms of up to seven years…

“However, there is a concern that hundreds of Kashmiri youth, journalists, political leaders, human right defenders and others arbitrarily arrested in the course of 2019, including following the repeal of Article 370 of the Indian Constitution on 5 August 2019, (which provided special status to Jammu and Kashmir) will not be among those benefiting from the measure.

“Human rights groups and UN experts have repeatedly called for the release as a matter of priority of ‘those detained without sufficient legal basis, including political prisoners and others detained simply for expressing critical or dissenting views.’”

Among Kashmiri political prisoners are 73-year-old Mian Qayoom, President of the Kashmir High Court Bar Association, and Yasin Malik, chairman of the Jammu and Kashmir Liberation Front who is also member of the All Parties Hurriyet Conference.

Both are held in Delhi’s notorious Tihar Jail.

According to Mian Muzaffar, nephew of 73-year-old Mian Qayyum, his uncle is “diabetic, has a single kidney and also has hypertension…”

Yasin Malik is a heart patient. He also suffers from hypertension. Recently, the Modi regime charged him with the murder of an air force officer, an incident dating back to 1990.

Kashmiri leaders view the charge against Malik as an attempt to prepare the grounds for his execution.

On April 1, he went on hunger strike until death to protest his illegal detention, lack of proper legal representation in court and the appalling conditions in prison.

Family members, Kashmiri political leaders as well as human rights activists have all demanded that Kashmiri prisoners held in Indian prisons should be released immediately as they face an imminent threat from COViD-19.

Khuram Parvez, human rights activist and coordinator of a coalition of civil society, said that the spread of Covid-19 was a threat to the lives of prisoners and the Indian government should release them as most of them are under preventive detentions.

“We want their immediate release. Most of them are under preventive detentions and the best safety for them right now is the confines of their homes,” Parvez said.

“At this stage, no one can disturb law and order. People in big number everywhere is a threat owing to Corona and if it goes out of control no one will be safe,” he added.

Many detainees are of vulnerable age and some have underlying health conditions, according to family members.

Last month, India’s Ministry of Home Affairs revealed that 7,357 persons had been arrested in Jammu & Kashmir since August 5, 2019, when India illegally annexed the state. While the majority have since been released, the statement said hundreds are still detained.

Another 3248 prisoners are in jails in Jammu and Kashmir, according to a report in the Hindustan Times of March 23.

Other reports from last August compiled by Indian female lawyers say that Indian occupation forces had arrested at least 13,000 Kashmiris, including some as young as 12 years old following the August 5 crackdown.