Home / 43rd Anniversary of the Islamic Revolution in Iran

43rd Anniversary of the Islamic Revolution in Iran 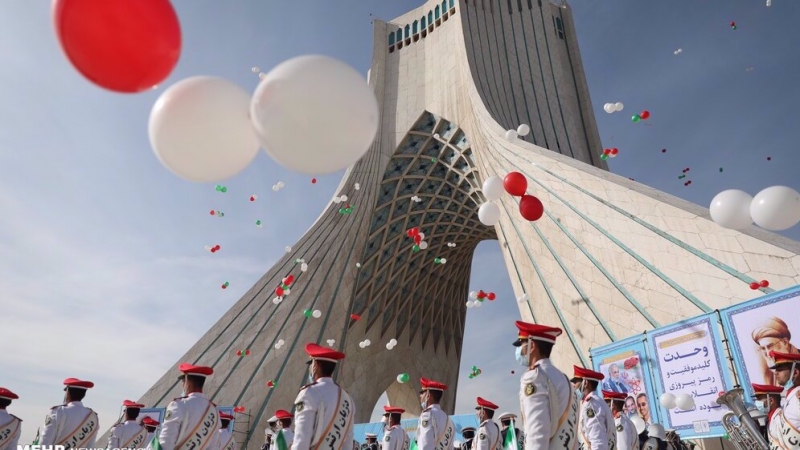 February 11 is an important date in the history of the Islamic Republic of Iran. It was on this day in 1979 that the people of Iran, under the leader of Imam Khomeini, overthrew the despotic rule of the Shah to establish the first Islamic State in contemporary Islamic history.

This popular revolution sent shockwaves globally because it was based on Islamic values and principles. It drove a nail in the coffin of the imperialist and Zionist projects.

Despite decades of illegal sanctions imposed by the US and its allies, Iran today is a regional power making great progress with advancements in space technology, nanotechnology, atomic energy, medicine, agriculture, engineering, and other sectors. In Iran, these celebrations starting on February 1, are referred to as Deh-e Fajr (Ten Days of Dawn) and culminate on February 11.

Millions of Iranians march towards to two major roundabouts in the center of Tehran known as Inqilab (Revolution) and Azadi (Liberation) Squares every year to mark the anniversary of the revolution. Despite the pandemic, this year will be no different, although attendance may be kept low for health reasons.

The title Deh-e Fajr is based on the Qur’anic verse, Wal Fajr-e wa liyalin ‘Ashr (Surah al-Fajr: 1-2), and refers to the last ten days before the remnants of the Shah’s regime were toppled.

It is expected that this year too, Azadi Square will be packed with a sea of humanity. Children with red bandanas on their foreheads will sing the national anthem. People—men and women, and children—will wave Islamic Republic flags, and carry portraits of Imam Khomeini, the Rahbar, the martyr, General Qassim Soleimani, and the martyred nuclear scientist Mohsen Fakhrizadeh. Some people will even have portraits of their loved ones that were martyred during the Iraqi-imposed war (September 1980 – August 1988).

Soon after the victory of the Islamic Revolution in 1979, many US institutions and think tanks in Washington start issuing dire predictions about the imminent collapse of Islamic Republic. Iran has not only survived all these years but flourished in spite of illegal US sanctions. It has remained independent and succeeded in achieving incredible scientific progress even while billions of dollars of its assets remain illegally frozen. These illegal US acts constitute economic terrorism and are meant to bring the Islamic Republic to its knees but have failed.

Despite such challenges, Islamic Iran has emerged as a leading regional power. Meanwhile, the US has been humiliated in Afghanistan, Iraq, and Syria. Iran not only defeated the Daesh (ISIS) terrorists but successfully defeated US-Zionist plots in the Middle East and created an Axis of Resistance from Palestine to Yemen.

The Islamic Revolution was born in 1979 in the midst of two oppressive systems: capitalism and communism. Imam Khomeini accepted neither east or west; he firmly believed in an independent Islamic State, and the self-reliant doctrine of Wilayat-al-faqih (Rule of the Jurist-Consult).

The influence of the Islamic Revolution has spread far and wide. It is not confined to any particular religion or ethnicity.

Many Sunni Muslims support and appreciate the importance of the Islamic Revolution. The distractors—among Sunnis at least—are largely the product of relentless propaganda by the Bedouin Kingdom and Zionist Western media outlets.

There is, regrettably, a similar lack of understanding among some Shi‘is as well who believe in an ideology known as “quietism”. They want to remain apolitical in a highly politicized world where neutrality on such crucial issues is not an option.

This passive form of Islam by refusing to take a stand against injustice in the absence of Imam Mahdi, is what they propagate. However, they ignore the stand Moses took against the Pharoah, Prophet Ibrahim’s confrontation with Nimrod, and Imam Hussain and Syedana Zainab’s revolt against Yazid ibn Muawiya.

They say, let the world be ruled by tyrants and oppressors. Let injustice prevail until Imam Mahdi re-appears from occultation. It is not our duty to speak up until then! This is clearly the wrong approach.

Iran pursues its political goals free from external interference. It freely chooses its friends and allies, who to trade with and who to support. The Islamic Republic is blessed with enormous oil and gas resources as well as other minerals. It has a highly educated and skilled population, which has made immense progress in the fields of science and technology.

In spite of sanctions, Iran makes highly sophisticated military equipment including missile technology. It has even launched a satellite into space. The Google CEO said that Iran is so far advanced in technology that it could hack into US drones and land them safely, as it did with the US Sentinel drone in 2014.

Iran is one of the top 10 countries in the world in stem cell research and nuclear technology. It is one of 24 founding members of the United Nations Committee on the peaceful uses of outer space, which was set up in 1958. Iran has sent numerous Satellite Launch vehicles (SLV) into space. The most recent launch was on February 1, 2021 on the anniversary of the Islamic Republic. It was named Zuljanah, after the name of Imam Hussain’s horse.

The US should recognize the legitimacy of the Islamic Revolution unequivocally and acknowledge that Iran is a major player in the Middle East. The Biden regime would do well to reconsider its reliance on coercive tactics like more than four decades of sanctions which have not weakened the Islamic Republic but grievously harmed the Iranian people whom America claims to support.

Lastly, in order to revive the Islamic civilization, we need to eradicate imperialism and racism, and establish the Islamic State based on popular governance, excel in education, create innovative economies and institute basic social justice.

But it would appear that both the criminal elements in Iran and their Western backers have overplayed their hand...

The continued centrality of Islamic Iran, 25 years after the Revolution

We open the section with IQBAL SIDDIQUI, editor of Crescent International, discussing the centrality and relevance of the Islamic Revolution...

Iranian politics a quarter of a century after the Islamic Revolution

For this special section, we particularly wanted an Iranian perspective on post-Revolutionary Iran. HUJJAT UL-ISLAM M. SAEED BAHMANPOUR, an ...

The sea of humanity stretched as far as the eye could see. The iconic Azadi Square in Tehran, the traditional location for celebrating the a...